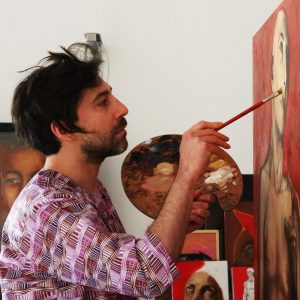 He currently lives in Munich, Germany.

He began his artistic training with studies in film and television direction and production at the National University of Villa María.

Universidad Nacional de Villa María and later with a specialisation in painting at the Escuela Superior de Bellas Artes Libero Pierini in his hometown of Río Cuarto, both institutions in the province of Córdoba,

Dante Montich and where he also had several group exhibitions.

In 2013 he moved to Unquillo, a small mountain town located a few kilometres away, where he met young artists from the local

with young artists of the local scene, and also with the renowned Carlos Alonso and Remo Bianchedi, who were his teachers.

who were his teachers. He founded and directed the publishing house Dínamo Poético, with which he published and illustrated more than 15 books by various Argentinean authors.

15 books by various Argentinean authors, including his own, in which he compiled a selection of his writings and paintings.

paintings. He also organised and participated in several poetry, painting and sculpture meetings in different cities of the region.

cities of the region.

She has studied and practised the performing arts with leading figures in dance, performance and acting.

performance and acting, which enriched her pictorial vision.

In 2016 he travelled to Italy and settled in the city of Bologna, where he continued his research and pictorial production.

pictorial production. In 2017 he presented his first European solo exhibition entitled “Malinconia” in Bologna, with

paintings and drawings made between 2016 and 2017. The following year, in 2018, she frequented Erica Calardo’s studio

Calardo where she deepened her studies on Italian Baroque painting.

In 2019, she inaugurated in Bologna the solo exhibition entitled “Il taglio della montagna”, made up of portraits in which

portraits in which his Latin American origin and the beginning of his new figurative stage are evident.

Since his arrival in Italy, he has participated in several group exhibitions in that country.

In 2021 she moved to the city of Munich, Germany, to participate in Super+ Tropika, a project that hosts artists and provides a space for